24 May, Day of the Bulgarian Education and Culture and of the Slavic Alphabet 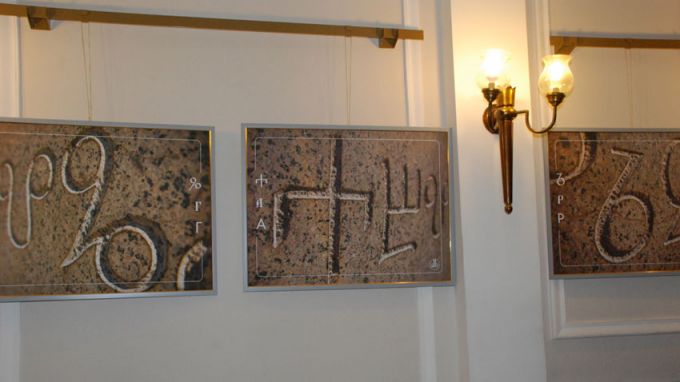 Depictions of the Glagolitic script. St. Cyril created the Glagolithic A in the form of the cross, as he thought of the alphabet as a Holy deed!

One of the most respected days on the Bulgarian holiday calendar – 24 May, is the Day of letters and the Bulgarian alphabet created in the second half of 9th century. This day takes us centuries back and reminds of a piece of heritage which has cast its spiritual light on many foreign lands and cultures.

In the days prior to 24 May, an exhibition opened at the Bulgarian Academy of Sciences (BAS) featuring Bulgarian alphabets – because after all, the present-day alphabet is not a one-time event.

Prof. Elka Mircheva from the Institute for Bulgarian Language at BAS specifies:

„The Bulgarian alphabet is something to pride on – and for a few reasons. The foremost among them takes us to the work of the holy brothers Cyril and Methodius and the fact that they created an original alphabet, completely new, based on the dialect they knew in detail. They were born in Thessaloniki. At that time the city was densely populated with compact Slavic Bulgarian population who spoke a variety of an eastern Bulgarian dialect close to the Rhodope Mountain region dialects. The two brothers used exactly that dialect to create the alphabet. Their exceptional input which is recognized as unattainable after them is the fact that they succeeded in finding a precise letter for every sound. In this way they could account for the specific features of the Bulgarian language.”

Prof. Elka Mircheva quotes Chernorizets Hrabar, a Bulgarian monk and writer from the end-9th, early 10th century, who wrоte that for a long time the Slavs were using strokes and notches, most probably runes. Later in time they began using Latin and Greek letters. The monk however rightfully asked: „How could anyone possibly write zhivot /life/ or shirota /breadth/ or Bog /God/ with Greek letters?” There are many such examples because the Greek language lacks in certain consonants and vowels typical of Bulgarian and of the rest of Slavic languages. Using Latin creates similar difficulties. Today a few Slavic and other nations use different versions of the Latin alphabet adapted to their languages. Some Latin letters are used in 2 or 3 versions (with additional diacritic sings) to denote certain sounds. The alphabet known as Glagolitsa (Glagolitic script) was the first Old Bulgarian and Slavic alphabet. It corresponded to the sounds in Slavic languages. The Bulgarian contribution into it is that it was based on a Bulgarian dialect, Prof. Mircheva notes.

It is often claimed that Cyril and Methodius did not create the earliest Slavic alphabet – the Glagolitsa – for the Bulgarian people but rather for the Moravian Slavs on a commission by Prince Rostislav, and that they never went to Bulgaria.

“All this is to a great extent true but expounded like this it denies the Bulgarian contribution into the very beginning of the Slavic script. Indeed, Cyril and Methodius went on a mission as political missionaries,” Prof. Mircheva comments. “Political and spiritual affairs at that time of the Middle Ages were closely linked. The two brothers were clerics but also politicians who were sent to Moravia with a very specific assignment. At that time Constantinople and Rome were fighting for supremacy in a Europe that was gradually Christianized.” The church was still undivided but the rivalry was clear. German priests were in control of liturgy among Moravian Slavs and service was held in Latin. The leaders in Constantinople however were aware that God’s word should be more comprehensible – and this was important from a political point of view. So Byzantium was to a certain degree ready to let spoken languages reach the souls of millions who were becoming Christians. The Moravian mission /863-885/ of Cyril and Methodius was not successful and ended with the death of St. Methodius in 885 /St. Cyril died in 869/. Their disciples were expelled and reached the Bulgarian lands. Three of them – Kliment, Naum and Angelarius – arrived along the River Danube and had a warm welcome from the newly baptized Prince Boris, Prof. Mircheva says. They received firm support which was part of the policy of the state for the development of the Slavic alphabet, literature and culture. With the cooperation of Prince Boris and his heirs – Tsars Simeon and Petar – the Bulgarian speech from a group of dialects emerged into a literary language. Without this consistent state policy the great work of the Saints Cyril and Methodius would have been reduced to the unsuccessful Moravian mission that has not left any important vestige in history.

Bulgaria’s contribution is also the creation of the Cyrillic script – a Slavic alphabet with very clear and perfectly applicable orthography. The Glagolitic script was strange in terms of design, unusual in Central Europe and within the boundaries of the Byzantine geopolitical influence. “This led to a version in which using 24 letters from the Greek alphabet were taken and further 12 letters were added to the Cyrillic for the specific Slavic sounds. These twelve letters were taken from the Glagolitic alphabet,” Prof. Elka Mircheva from the Institute for Bulgarian Language at BAS says in conclusion.

Photos: courtesy of Institute for Bulgarian Language at BAS

About the queens of cheerleading in Bulgaria

The dance routines of the Bulgarian cheerleaders, which reached the world stages, do not represent the usual entertaining dances of this type. They are full of risky movements and choreographic elements borrowed from rhythmic gymnastics,.. Stoyo Krushkin was born on 25 December, 1882, in Bistritsa village not far from Sofia. He was sent to Sofia at an early age. And that was the start of his passion for military bands as he watched them march in the streets of the city. He.. May 31, 2001 is the date on which by order of Bulgaria’s Minister of Defense one of the most popular military marches became the official anthem of the Bulgarian Army. The announcement took place solemnly, at a concert of a brass band composed..

About the queens of cheerleading in Bulgaria

The dance routines of the Bulgarian cheerleaders, which reached the world stages, do not represent the usual entertaining dances of this type...